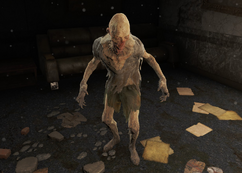 Jon Elwood (the Director) is a ghoul living in the Commonwealth in 2287.

Prior to the Great War, Jon Elwood was the director of Cambridge Polymer Labs. The lab was working towards the creation of improved polymer weaves and funded by the U.S. military. Prior to the bombs dropping, Jon received an ominous phone call from Colonel Kemp regarding the status of the project. After the bombs fell, it became clear to Jon that the phone call had been a warning.

Due to the external communications of the lab being disabled, Jon took it upon himself to find a way to regain contact with the colonel. After locking his research team in the lab and telling them that any unusual noises they might hear were military training exercises, he left the labs in order to find a working ham radio. While he was successful in his search, he suffered from a high dose of radiation and a stray bullet to his shoulder.

Upon regaining contact with the military, the liaison relayed that extraction teams could only be spared to recover assets vital to the war effort and that attempts to be extracted without completing the project would result in Jon and the research team being executed for treason. Believing that completing the project was the only hope of being rescued, Jon continued to keep the team locked in the labs.

While Ericka Elwood-Woolum eventually told the research team the truth of what was happening, it was not received well by Wilfred Bergman. Bergman cut off access to the isotopes needed to complete the project, ultimately resulting in the research team members dying or turning into feral ghouls. And eventually, Jon himself suffered the fate of becoming a feral ghoul himself while locked in his office.

Jon Elwood appears only in Fallout 4.

Retrieved from "https://fallout.fandom.com/wiki/Jon_Elwood?oldid=3272664"
Community content is available under CC-BY-SA unless otherwise noted.