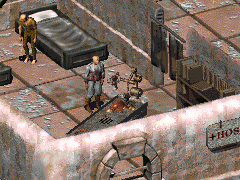 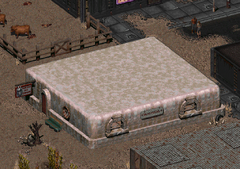 “That's nonsense. Vault City does extend special privileges to citizens, but only because they're better qualified to enjoy those things than brutish non-citizens. Besides, everyone can qualify for Vault City citizenship if they pass the tests.”

"Painless" Doc Johnson is a Redding physician in 2241, running the local hospital together with his assistant Rattray.

"Painless" Doc Johnson is a thin, nervous man serving as Redding's primary doctor.[1] Apart from offering medical care and surgical procedures (up to and including Phoenix Armor Implants, dermal impact armor and their respective upgrades), he is also responsible for processing the Jet batches New Reno sends into user ampules. He rationalizes it as taking care of Redding's miners. Otherwise, some quack with rusty tools would be doing that, preventing the miners from being able to work and causing health problems.

Doc Johnson supports Vault City in its bid to control Redding and New California trade.[2] He ignores the mistreatment of non-citizens in the City. His turning of a blind eye is not surprising when one realizes his medical expertise could only come from Vault City, making him a mole planted in Redding to further the interest of the city.[3] As such, should he be provided the means to cure the Jet plague, he will be elected mayor of Redding, replacing Ascorti and aligning it with Vault City, with all the benefits it entails.[4]

Doc Johnson appears only in Fallout 2.

Retrieved from "https://fallout.fandom.com/wiki/Johnson_(Fallout_2)?oldid=3355624"
Community content is available under CC-BY-SA unless otherwise noted.