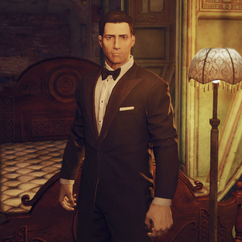 Gentleman Johnny Weston is a member of the raiders in Appalachia in 2103.

Johnny was born before the Great War in a military family, and grew up near U.S. Army bases all around the nation because of his father's military service. Although his family did not approve, Johnny pursued his dreams of becoming an actor in New York City. This caused a rift between him and his parents, stating that either they disowned him, or he disowned them, "depending on who you believe."[1] However, his career was ultimately a failure, describing himself as a "bum" when the bombs dropped in 2077.[2][3]

Johnny became involved with Meg Groberg's raider group when he infiltrated the gang by acting like he belonged, blending in among other survivors. When Meg found out that he had simply slipped into the gang, she reacted positively and the two shared drinks. They eventually "shacked up," and continued a physical relationship with each other. He followed Meg until they settled at the Crater, helping establish the new headquarters in Appalachia. His skill set benefits the raiders' operations, and everyone profits from keeping him around.[4] Now found in the Core, Johnny stands out among the other raiders because of the black suit that he wears. Talking to him will reveal that finding suits is easy, but keeping them clean is his secret.

During the quest The Ol' Weston Shuffle, the Vault Dweller of Vault 76 must convince Johnny to join the heist on Vault 79. Although he is already on board, Johnny wants something in exchange. He asks the Dweller to pose as a slave so that they can infiltrate Sargento's gang at the Watoga Civic Center and free Hal Gleeson from slavery. To do this, Johnny invents the character of "Reginald P. Humphries," an English man who became stuck in Washington, D.C. when the airplanes stopped running. After the Dweller fights through their matches (or simply kills all of Sargento's gang) and breaks Hal Gleeson out of captivity, Johnny meets with the two of them. Although Hal was once Johnny's best friend, it is revealed that the true purpose of this mission was so that Johnny could kill Hal and tie up loose ends from when Hal attempted to betray him. Johnny believes that his relationship with Meg caused Hal to become jealous of him.[4] However, Johnny later comes to regret killing Hal, remarking that he loved Hal like a brother.[5]

If Johnny survived Buried Treasure and Secrets Revealed, he will return to his room in the Crater Core. He will occasionally offer some random chems or aid items, and can also be asked about his thoughts on the heist.

If he is killed during either quest, the password to his terminal in his room can be obtained from his body.

Johnny will mention that he does not mind "shacking up" with the player character, regardless of their gender, though he doubts that Meg would approve of such a relationship.

Johnny Weston appears only in Fallout 76, introduced in the Wastelanders update.

Retrieved from "https://fallout.fandom.com/wiki/Johnny_Weston?oldid=3502552"
Community content is available under CC-BY-SA unless otherwise noted.