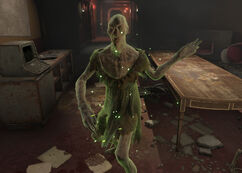 Johnny Morton is a feral ghoul encountered in the Commonwealth in the Creation Club content "Captain Cosmos."

Johnny Morton was an extra on the film set for the Captain Cosmos TV show. However, on the day they were filming the season finale (the same day the bombs dropped) he was injured when a supposed prop weapon turned out to be real and used live ammunition. Morton was injured on set and was placed in the medical area until the paramedics could arrive. However, the bombs fell before that happened and Morton mutated into a feral ghoul. He can still be found resting on the medical table he was placed on.

Retrieved from "https://fallout.fandom.com/wiki/Johnny_Morton?oldid=3123813"
Community content is available under CC-BY-SA unless otherwise noted.