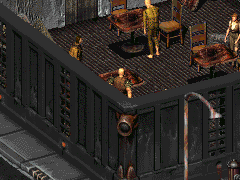 Sullivan can raise the Chosen One's Unarmed and Melee Weapons skills each by 10%. If the Chosen One has at least $10, they can find out that Sullivan used to box in New Reno.

Retrieved from "https://fallout.fandom.com/wiki/John_L._Sullivan?oldid=3345785"
Community content is available under CC-BY-SA unless otherwise noted.