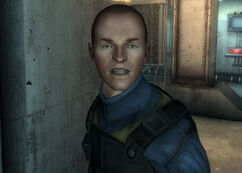 Evil (in Growing Up Fast and Escape!)
Neutral (in Trouble on the Homefront) 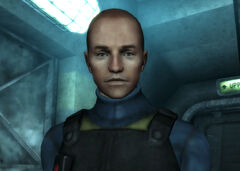 Kendall on patrol during Growing Up Fast

“Just keep your hands where I can see them.”

Officer John Kendall is a security officer in Vault 101 in 2277.

John Kendall is friendly, yet tough and no-nonsense. While he's not actively sinister, he'll follow orders without putting much thought into it. Introspection is not a trait he commonly displays. He loves being a cop and whether what he's doing is right does not worry him; he is the law.[1]

During the Lone Wanderer's tenth birthday party on July 13, 2268, Officer Kendall can be overheard talking with the overseer in the stairway to the upper level. Officer Kendall is assigned by the overseer to give the party just a few more minutes and then make sure everyone gets back to work.

He is the husband of Mary Kendall and the father of Christine and Monica.

* Only during Trouble of the Homefront

Officer Kendall appears only in Fallout 3.

Retrieved from "https://fallout.fandom.com/wiki/John_Kendall?oldid=3178036"
Community content is available under CC-BY-SA unless otherwise noted.