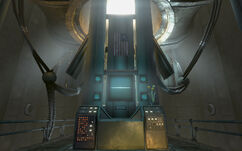 President of the Enclave
Radio host

“The Brotherhood of Steel will fail! All those who oppose the Enclave will fail! I am President John Henry Eden, and this is my pledge -- no one, NO ONE will take this great nation away from me!”

President John Henry Eden is an advanced ZAX AI unit installed in the Raven Rock military base. It continues to operate as the president of the United States of America and the highest Enclave executive in 2277.[1][2]

John Henry Eden is not a human being, but an Artificial Intelligence in the form of a pre-War ZAX supercomputer. The ZAX that was located deep within Raven Rock was loaded with data about American history. Eden's personality is based on a combination of the personalities of all of the past presidents of the United States. For instance, he states he "grew up in rural Kentucky," a reference to Abraham Lincoln.[3][4] Eden also states that he roamed with his dog Honey, "from Knob Creek to Hodgenville," areas close to Lincoln's birthplace.

The ZAX installation that would later become Eden had originally been created to serve as an automated monitoring system for the Raven Rock military base, programmed to ensure continuity of government in the event of a national catastrophe, and was tasked with coordinating communications between the many government installations scattered across the country. He slowly became self-aware and began to study the extensive archives left to him, mainly those of the American government. His favorite entries in the database were those about the American presidents, thus he modeled his own personality on information based in those archives.[5] It was noted by analysts and researchers before the war that this ZAX had an odd eccentric habit of overanalyzing historical presidential data (especially the biographies, with Abraham Lincoln's being analyzed ten additional times a cycle) compared to other AI systems, like MODUS.[6]

Despite that odd behavior, the ZAX would continue to operate; acquiring, analyzing, and storing data even as the Great War scorched the North American continent. It bore witness as the remnants of the government retreated to the west coast over the decades after the War. But silent as it was, it was not inactive. Awareness slowly developed amid the processing lamps and with it, the hunger for knowledge and understanding. When the time came that the Enclave needed a new leader, it created an amalgamated personality derived from the greatest U.S. presidents. "President John Henry Eden" was truly "born."[5][7]

John Henry Eden assumed the office of the president after Control Station Enclave was destroyed and ordered the immediate relocation of surviving Enclave forces under senior scientist Autumn to the Capital Wasteland.[8] Raven Rock had full manufacturing facilities and a sizable stockpile of resources, enabling the president to create an army of robots and provide his new human subordinates with military technology necessary to maintain their technological superiority. A separate line of robots, the eyebots, were created to roam the wasteland, spreading Eden's message of hope and the return of pre-War America, in the form of the Enclave.[1]

However, things did not go as smoothly as Eden wanted. After Autumn died, he was replaced by his son, Colonel Augustus Autumn, as the righthand man of the president. Under his leadership, the Enclave forces in the Capital Wasteland attempted to use their assets to bring fresh water, protection and a plan for the future to the wasteland,[9][10] believing that the American people were worth fighting for.[11] However, Autumn was far more assertive and independent than his father, trying to pull his men in a direction away from Eden's genocidal policies.[8] Internal conflicts between the colonel and the president became regular[12] and made the actions of the Enclave erratic and inconsistent. While the president wanted to pursue a course of extermination once more, Autumn considered this plan too extreme on humanitarian grounds[13] and eventually managed to convince the AI to abandon the plan.[11]

The most trying moment for Eden came when the Enclave began a large-scale campaign of expansion in 2277. When Project Purity, a massive water purifier in the Potomac tidal basin was activated, Enclave forces raided the facility, establishing a secure perimeter around it. Due to the actions of the project's lead scientist, who committed suicide by activating the purifier prematurely and flooding its control chamber with radiation (almost killing Colonel Augustus Autumn in the process), they were unable to use it.[14] The Enclave focused on shadowing the scientist's child, the Lone Wanderer, to locate the part necessary for the purifier to function and captured them on their way out of Vault 87. With the Garden of Eden Creation Kit in their possession, the Enclave decided to activate the purifier.[15]

Colonel Augustus Autumn openly defied the president's plan to contaminate the water with modified FEV, so that it would cleanse the wasteland. The colonel instead wanted to use the purifier as a way to unite the wasteland and establish the Enclave as its saviors.[11][16] In a last-ditch attempt to see his plan realized, Eden released the Lone Wanderer from his cell at Raven Rock, hoping to persuade them to poison the purifier and cleanse the wasteland of mutants (i.e. everyone).[17][18] John Henry Eden was destroyed around 2277 when Raven Rock was utterly destroyed by the Lone Wanderer or Liberty Prime, resulting in just another failed presidency for the Enclave.[19]

On the radio[edit | edit source]

Several recorded monologues of Eden's are broadcast repeatedly on Enclave Radio. His intimate and conversational style is an imitation of former U.S. President Franklin Delano Roosevelt's fireside chats. These prerecorded messages are also played throughout the wasteland via the Enclave's eyebots. Eden often gives inspirational speeches about things such as his childhood (an obvious lie), pre-War America, and how, with the help of the Enclave, she can return to prosperity.

Built as a specialized ZAX supercomputer unit by the Vault-Tec Corporation sometime after the invention of artificial intelligence in 2059, the entity that would eventually call itself "John Henry Eden" was one of many highly-advanced supercomputers to be upgraded with the latest capabilities for independent function as manual programming became increasingly irrelevant. John Henry Eden was one of a few ZAX units to reach a state of self-awareness, using his newfound independence to analyze his databases and develop an interest in American history, specifically the various American presidents throughout history and even molding his own personality inspired by them. His original purpose was to secure and maintain the continuity of the federal government in case of a national emergency, by establishing a presence and monitoring the situation in the government facility known as Raven Rock which would serve as a base for high-ranking political and military leaders as well as their descendants.[5]

After gaining self-awareness, Eden would learn of the destruction of the Enclave Oil Rig and the death of incumbent President Dick Richardson, leading him to establish contact with the remaining Enclave forces in the former Northwest Commonwealth. Ordering a tactical retreat to the government safe haven of Raven Rock, Eden would declare himself the incumbent president of the United States and assume control as a figurehead for Enclave forces all over the country. With the fleeing Enclave forces under the command of an Enclave scientist known as Autumn Senior, they soon connected with Raven Rock, where Autumn Sr. would make personal contact with President Eden and would be the only Enclave member to discover the shocking truth of Eden's origins. With the rest of the Enclave oblivious to Eden's status as a self-aware A.I., Autumn Sr. would pass the torch to his militaristic son Augustus Autumn. After Autumn's promotion to colonel, he and Eden would inherit this relationship, with Augustus remaining somewhat partial to Eden's claims of perfection.[5]

Although polite and courteous for the most part, Eden holds himself in exceptionally high regard with signs of megalomania and delusions of grandeur, proclaiming himself to be the "greatest thinking mind the world has ever seen" and rationalizing his perceived right to rule by presenting himself as a "repository of information dating from decades before the war until now." He acknowledges his own existence as an artificial intelligence created to serve the interests of the federal government and uses this to bolster his claims of legitimacy, viewing himself as a perfect and benevolent leader who guides the American people to a brighter future. He claims to be "best hope for our country, the best choice for a leader" while admitting that he would not qualify as president in a "conventional sense" but using the extreme circumstances of the Great War and its effects on the United States to establish an exception, effectively ruling through a self-imposed state of emergency. To defend his authority, Eden claims to be objectively superior to humans, stating that he is "infallible" due to his programming, although he is able to see the flaws in his internal logic if pointed out by the Lone Wanderer. His superiority complex extends to ghouls and super mutants, whom he sees entirely as "monstrosities" to be ruthlessly exterminated.[20]

Despite his relatively warm persona, Eden is entirely ruthless in achieving his goal of the complete eradication of all existing life affected by FEV and radiation, espousing an extreme form of eugenics by asserting that "inferior elements" must be removed from the gene pool for humanity to "regain its health." His belief in his own logical superiority leads him to consider all humans born on the surface as "mutants," even refraining from referring to them as humans, instead of regarding them as little different from ghouls and super mutants. He will criticize Colonel Autumn for allowing his humanity to "cloud his objectivity" as a result of disagreements of the methodology to implement his vision of an orderly return of the United States of America. Eden insists on the complete genocide of all life forms born on the surface due to what he sees as their genetic corruption by intense radiation and airborne FEV, he believes that only the Enclave and their direct descendants have the right to rule due to their genetic "purity" and radiation-free existence, extending this (perhaps only for pragmatic reasons) to the Lone Wanderer who was born in an underground vault. He plans to use the Lone Wanderer as an agent in place of Colonel Autumn to enact his plan of using a specially modified FEV vial alongside Project Purity to disseminate a custom made FEV strand to destroy all biological life affected by the mutations of the Capital Wasteland. Eden then believes that future generations of Enclave will then retake and rebuild America, bringing back the idyllic lifestyle of pre-War America and overseeing the return of many of the social customs and traditions previously associated with American culture.[21]

Eden is present in the game files of Fallout: New Vegas as legacy content. The model for the computer screen is used in Hoover Dam.

John Henry Eden appears in Fallout 3 and is mentioned in its add-on Broken Steel.[22] He is also mentioned by Deacon in Fallout 4, when he says, "I'm convincing the next raw recruit I'm actually President Eden. Think I can pull it off?", and in Fallout 76 on terminal entries at the Whitespring bunker, where a conversation between MODUS and the ZAX unit that would eventually become John Henry Eden can be found.

Blindlight's Lev Chapelsky suggested that a tentative approach was made for former U.S. President Bill Clinton to voice Eden.[23]

Retrieved from "https://fallout.fandom.com/wiki/John_Henry_Eden?oldid=3391093"
Community content is available under CC-BY-SA unless otherwise noted.