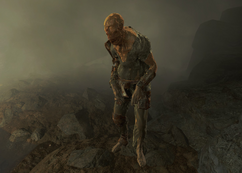 John Hatfield is a feral ghoul found in the Commonwealth in 2287.

John Hatfield was the project manager for Station 2 within the Dunwich Borers quarry prior to the Great War. He was particularly focused on efficiency, thanking the management for upgrades to equipment and pestering Bradley Ramone over slowed production traffic from Station 3. He was hopeful that production would increase once Station 3 and Station 4 received needed excavation equipment. At some point, he was lured into a trap in a chamber near Station 4 by Tim Shoots and the "management." Since this event transpired he has become a feral ghoul, guarding the chamber above the enshrined Kremvh's Tooth.

John Hatfield appears only in Fallout 4.

Retrieved from "https://fallout.fandom.com/wiki/John_Hatfield?oldid=3177225"
Community content is available under CC-BY-SA unless otherwise noted.