John Hancock (born John McDonough) is the ghoul mayor of Goodneighbor in 2287, and a potential companion of the Sole Survivor.

Born John McDonough, Hancock is the estranged younger brother of Diamond City's mayor, McDonough.[1] The two had a rocky relationship from the beginning; John considered him "entitled" and claims that the elder brother would sometimes shove rotten tatoes down the back of his shirt and slap them.[2]

Despite this, he held some degree of brotherly love for his elder sibling - but this all changed in 2282, when the elder McDonough ran for mayor on an anti-ghoul platform, inciting hatred and fear of the city's mutated inhabitants.[3] The relationship between them broke down completely when John confronted him in his office after his inauguration speech, and his brother offered no sign of remorse for the anti-ghoul violence that his campaign had incited, simply gloating that the city was finally his.[4]

John tried to save as many ghouls as he could by relocating them to the town of Goodneighbor, at the time run by the ruthless mob boss Vic. Unfortunately, many of the refugees could not adjust to life in the slum and fled into the ruins of Boston and the surrounding wasteland of the Commonwealth, eventually dying to starvation or violence.[5] Over time, he fell into a rut of depression and drug abuse, at some point taking an experimental, radioactive drug in an attempt to transform himself into a ghoul. The attempt was successful, and he today remarks that both the high and the subsequent transformation were "so worth it."[6]

His absolute lowest point came after witnessing the murder of a fellow drifter at the hands of Vic's henchmen. Despite knowing that there was nothing he could have done against the armed goons, John nonetheless considered his lack of intervention cowardly, and in the aftermath felt "like less than nothing." In a fit of despair, he went on a particularly intense bender of drug abuse, eventually blacking out completely.[7][8]

When he regained consciousness, John found himself lying on the floor of the Old State House next to a set of clothes that belonged to the founding father John Hancock.[9] He assumed the identity of the historical figure and set out to raise a revolutionary militia to overthrow Vic.[10] Temporarily going sober in preparation, he gathered a crew of drifters and convinced KL-E-0 to loan them some weapons.[11]

They gathered together one night, waiting on the rooftops and inside buildings for Vic's goons to gather. Holding off until their opponents were heavily intoxicated from a night of partying, the militia burst from their hiding spots and massacred the gangsters.[12] His muscle wiped out to a man, it was a simple matter for Hancock and his men to storm Vic's quarters in the State House, dragging him out to be hanged by the neck from the balcony.[13]

Looking down from the balcony and seeing that most of the town had gathered to witness the commotion, Hancock issued a simple proclamation: "Of the people, for the people!" With that, he was no longer John McDonough, the Diamond City refugee, but John Hancock, the undisputed mayor of Goodneighbor.[14]

By 2287, Hancock continues to serve as mayor. The majority of Goodneighbor's citizens look to him for leadership, and he acts as a source of reassurance concerning the looming synth threat. Following the events of Bobbi No-Nose's big plan (The Big Dig), a plot to steal from his stronghold, he claims to feel too pampered and comfortable.[15] He gives a speech proclaiming his leave of absence. ("No one in power should be comfortable for too long.") Hancock then proceeds to offer his services to the Sole Survivor as a possible companion.

John Hancock appears in Fallout 4 and Fallout: The Board Game.

Cut dialogue lines of Finn refer to Hancock as deceased.[17][18]

As seen in the launch trailer 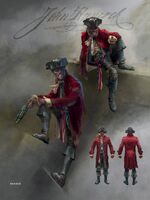 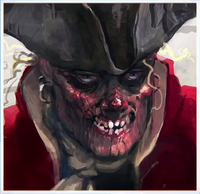 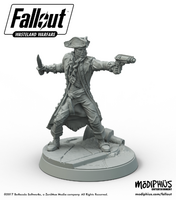