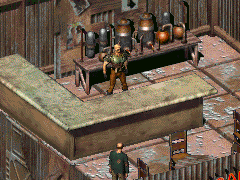 Owner and bartender of the Spittoon
Companion (optional)

“I wouldn't mind plugging a few holes in some kidnappers. A little frontier justice never hurt anyone...well, at least not me.”— John Cassidy

John Cassidy[1] is a veteran wastelander, bartender and a potential companion who resides in Vault City in 2241.

An old man with deep wrinkles, John Cassidy is a veteran of the worst places of the wastelands and has the scars to show for it. These memories of an adventurer's life include scars from a 2203 knifing and old wounds from shootings in 2195, 2199 and 2201. He also has a metal plate in his skull and a fake eye.[2] John Cassidy is a pleasant but prejudiced man to talk to, provided the person doing the talking doesn't get on his bad side or happen to be the wrong race as he despises ghouls for existing and generally dislikes people he perceives as despicable.[3] He can be direct at times and he has further issues with tribal prejudice, but overall he is a great companion.

Cassidy settled down in Vault City after a life of adventure when his heart started to fail him. He requires regular cardiac booster shots to keep his heart working properly, essentially leaving him stuck in Vault City.[4] He runs a bar, the Spittoon, in the Courtyard, paying a hefty fee for a license to sell real alcohol on the premises. He manages to get by well enough, able to pay his rent, license fee, and afford booster shots from Doc Andrew. His business took a hit recently, as Sergeant Stark led a raid on his bar, confiscating his alcohol and detaining several customers. Already disgusted with the city, it is practically the final straw for him.

Cassidy joined the Chosen One in his journey, leaving Vault City behind. The two eventually parted ways, with Cassidy settling down again with a tribal, despite his reservations about tribals. At his ripe old age, John became a father of a daughter who took after her father.[5] A few years later, he left the two and journeyed east of California, never heard from again. He went on to search for Texas, breaking south through NCR and past Dayglow.[6][7]

Note: Unarmed will be tagged when Cassidy is equipped with power armor, as the Strength bonus it confers boosts his Unarmed skill above that of Small Guns.

In regards to the character, Chris Avellone stated, "[Cassidy] was mostly there because we wanted to do another companion in this location, and I was like, well I don't want to really do another talking head, I already did a lot with Myron, how about I do a much more simpler, just fun combat character, Cassidy, the gun-toting bartender, sure."[8]

Retrieved from "https://fallout.fandom.com/wiki/John_Cassidy?oldid=3407353"
Community content is available under CC-BY-SA unless otherwise noted.