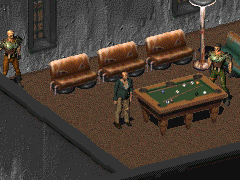 Assassinate Westin in NCR without making it look like a murder
Murder Carlson in NCR
Eliminate Mr. Bishop

“You piss off anyone down there, make them think that I had ANYTHING to do with that son of a bitch kicking the bucket, and I'll make sure no one can identify your corpse.”

John Bishop is the middle-aged, ruthless leader of the Bishop clan. He represents a power-hungry family from New Reno in 2241.

Bishop is a powerful man, controlling one of the two most powerful families in the city (the Mordinos are arguably just as influential since they corner the Jet market). He is seeking to end New Reno's mob-based anarchy by bringing it into an alliance with the NCR and Vault City. As part of this process, he is working within the NCR's congressional system to legalize prostitution and gambling within the Republic. The NCR hired Bishop as a middleman, who in turn hired the raiders who harass Vault City, in the hopes that Vault City will turn to the NCR for protection.

He is a neglectful husband, indifferent to the fidelity of his wife Leslie Anne Bishop, and he cheats whenever it suits him. He has also provided little guidance for his daughter, Angela Bishop, who like her mother is promiscuous and also a Jet addict. Nevertheless, he is extremely possessive and easily incited when one impinges on his perceived territory. Bishop once skinned a boy whom he found out had gotten his daughter drunk.

John Bishop appears only in Fallout 2 and is mentioned in the Fallout Bible.

Retrieved from "https://fallout.fandom.com/wiki/John_Bishop?oldid=3263023"
Community content is available under CC-BY-SA unless otherwise noted.