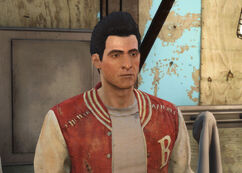 John is a hairstylist and barber who resides in the Diamond City market in 2287.

John lives and works with his mother Cathy at the Super Salon in the Diamond City market. Although he is just as fearful as anyone in Diamond City about the threat of the Institute,[1] he is willing to shut down his mother's paranoia about Geneva being a synth since he has cut her hair.[2] Although it does not seem like the arguments between John and his mother ever do stop.[3] His father, who is not around, was also a hairstylist before John.[4]

As a barber, John can change the Sole Survivor's hairstyle and color for 15 caps a session.

John appears only in Fallout 4.

Retrieved from "https://fallout.fandom.com/wiki/John_(Fallout_4)?oldid=3289960"
Community content is available under CC-BY-SA unless otherwise noted.