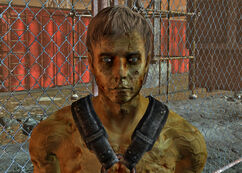 “It's me, your brother John-John. You remember me. Don't you, Billy?”

John-John (simply called "Pitt slave" ingame) is a slave in the Pitt in 2277.

John-John is a slave encountered the first time you enter the Steelyard. Should the player save him on their first encounter, he leaves the Steelyard and is not mentioned again.

When taking their first few steps into the Steelyard, the player will notice a slave trying to talk to a trog. This turns out to be John-John, attempting civilized conversation with his now-trog brother Billy. Although John-John gives his best attempt to bring some sense to his brother, he soon realizes that his brother is no longer human. He then slowly backs away, and eventually begins running from Billy, only to be stopped a few feet later at a locked gate. Billy then attacks him. John-John will not fight back and, without player intervention, will eventually fall victim to his brother. Billy will then promptly attack the player.

Should the player choose to kill Billy, thus saving John-John, he will walk over to his brother's corpse and mourn his loss. He offers no thanks or dialogue options; when a conversation is attempted, he only pouts a pitiful "Billy" and continues to sob.

Mentions of how trogs lose the mental capacity to reason, even with loved ones, are mentioned in Sandra's trog research entry on her research terminal.

John-John appears only in the Fallout 3 add-on The Pitt.

Retrieved from "https://fallout.fandom.com/wiki/John-John?oldid=3348110"
Community content is available under CC-BY-SA unless otherwise noted.