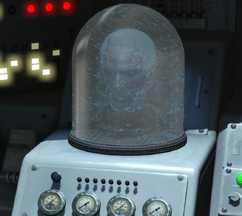 Cappy in a Haystack

Bradberton was only an amateur chemist when he began developing what would become the nation's most popular soft drink in 2042.[1] It took him nearly two years, and the help of multiple other organic chemists he would later call his "Beverageers," but in late 2042, Nuka-Cola became a reality. Within merely a year, Nuka-Cola was the top-selling soft drink in the United States.[1][2][3]

On Memorial Day weekend of 2049, Bradberton watched on as hundreds of people enjoyed his soft drink at a fairgrounds; he remarked that "A day like this should be every day!", inspiring the idea of his theme park, Nuka-World. The success of Nuka-Cola was so immense that Bradberton was able to fund and build the entire theme park in less than a year, with doors opening to Nuka-Town USA and Kiddie Kingdom on May 1, 2050.[4]

With over 40,000 visitors admitted into the park at its grand opening, the park was an instant success and more attractions were planned to be added to Bradberton's park in the coming years. This included Dry Rock Gulch in 2058 and Safari Adventure in 2067, both of which essentially doubled the number of visitors to the park immediately. The Galactic Zone was the last ambitious park to be added in 2072.[4]

With the overwhelming success surrounding his professional life, Bradberton garnered the attention of the United States military. Bradberton's Beverageers were some of the top organic chemists in the nation, prompting General Braxton of the Army Research Laboratory's Weapon and Material division to propose a contract with Bradberton in March of 2076:[5] should Bradberton sign away his employees to work on chemical and biological weapons for Project Cobalt, he would be greatly compensated.[6]

However, Bradberton's ego was so inflated by now that he could not be swayed with mere money; he wanted more. With his influence in Washington, D.C., Bradberton was able to uncover information about a top-secret project: the LEAP-X program (Life Extension And Prolongation). This project was dedicated to keeping humans alive indefinitely via a specialized machine; Bradberton knew that the world as he knew it was coming to an end soon, and with this project, Bradberton could live forever.[5][6]

General Braxton accepted the offer, and Bradberton put a team to work on the project immediately. Other than Bradberton and the Project LEAP-X team, Bradberton's executive assistant Peyton Huxley was the only one who knew about Bradberton's plans, and was trusted to handle his employer's affairs once he stepped out of the world's spotlight.[7][8]

Bradberton had originally thought the project involved the creation of a living bio-suit that would preserve the human body long after it would normally expire; however, much to Bradberton's frustration, the LEAP-X team informed him that because of how much power and how many special components the project required, no more than 15 pounds of organic material could be accommodated: this left him no choice but to have his head surgically removed to be preserved by the machines.[9]

On April 2, 2077, Bradberton underwent the procedure in the personal vault beneath his office in Nuka-World, promised by Peyton Huxley that he would visit every day to keep Bradberton informed on the status of his soda empire.[7] This schedule continued until the day of the Great War, on October 23, 2077. With Huxley dead, Bradberton was imprisoned in his own vault for over 210 years – day in, day out, staring at the same wall for more than 76,700 consecutive days. That is, until the Sole Survivor of Vault 111 and Nuka-Cola fanatic Sierra Petrovita stumbled upon his self-imposed prison in late 2287.[10]

An additional character render for Bradberton is found within the game's files, with the base id xx044D61. If spawned using the console, a silent NPC wearing wildman rags will appear. This render matches the one found in the game's files for General Braxton.

John-Caleb Bradberton appears in the Fallout 4 add-on Nuka-World. He is mentioned in Fallout 3 and the Fallout 76 update Wild Appalachia.[11]

Retrieved from "https://fallout.fandom.com/wiki/John-Caleb_Bradberton?oldid=3474577"
Community content is available under CC-BY-SA unless otherwise noted.