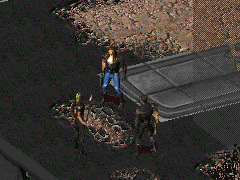 Joey is a small-time chem dealer in the western side of the Den in 2241.

Joey used to be a good kid, but ever since he hooked up with his punk friends, he has taken a turn for the worse. Joey, now 19, is a jet dealer peddling it to the Den's denizens at a large mark up. Mom has not seen him in so long that she barely remembers his name.

Before becoming a drug dealer, Joey lived in the abandoned homes on the den and selling what he could find in them. One such home had a shiny gold locket that Joey kept for himself. However, the locket had a great significance and now some say that the house Joey got the locket from is haunted.

Joey appears only in Fallout 2.

Sleeping with him makes him move up on the map, closer to Becky's. As soon as the Chosen One leaves the map, he will disappear, preventing the Chosen One from getting Anna's locket unless he had been robbed of it. [verified]

Retrieved from "https://fallout.fandom.com/wiki/Joey?oldid=3277308"
Community content is available under CC-BY-SA unless otherwise noted.