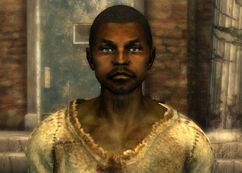 “I'm Joe Porter. I make sure folks around here can get a meal when they need it.”

Joe Porter is a merchant in Canterbury Commons in 2277.

Joe Porter, or "Porter Joe" as the name he prefers to go by, was born in 2249 and once a loader-for-hire at a caravan. However, when he first arrived at Canterbury Commons, the idea of having a permanent base of operations and a steady community was very appealing to him. He settled down there with his dog, Ol' Mule, in about 2271 and has been working as an unloader, a basic cook, and a basic repairman since then. Since the death of his dog, he's been minding the town diner, the center of chatter in this settlement.[1]

Joe Porter appears only in Fallout 3.

Retrieved from "https://fallout.fandom.com/wiki/Joe_Porter?oldid=3244233"
Community content is available under CC-BY-SA unless otherwise noted.