BeardGoateeCircle
EyebrowM
“It's about time. I saw some of the townies gathering at the saloon, so we've got a militia to take down. We get rid of them and we own this place.”

Joe Cobb is the leader of a small group of Powder Gangers in 2281.

A career criminal, Cobb has been running with some of the toughest gangs the wasteland has seen.[2] However, nothing lasts forever and ultimately he was incarcerated for robbery, arson, and murder.[3] Placed in the NCRCF on a work-release program, he took his freedom when Samuel Cooke triggered the prison break. Salvaging armor from dead guards, he and his men started to haunt the stretch of Long 15 between Sloan and Primm. His recent string of successes was marred when a Crimson Caravan trader going by the name of Ringo decided that combat was the better part of valor and started shooting during a shake down.

Cobb and his fellow gangers took down the caravan,[4] but Ringo managed to escape and hole up in Goodsprings.[5] The denizens of the town took him in and gave him shelter,[4] infuriating Cobb.[5] As of October 19, 2281, he is busy tearing the place up, trying to intimidate the townsfolk into giving him up.[6]

Placeholder lines for some of Joe Cobb's dialogue exist in the game's files, grouped together with other lines that are voiced Gregory Alan Williams. This may suggest that he was originally intended to voice Cobb. However, the placeholder lines are voiced by someone unknown. 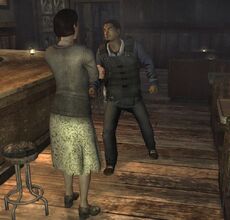