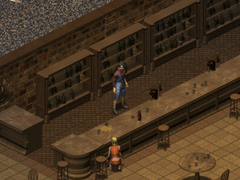 “Who, me? I'm Joe and this is my bar. You can find the mayor here sometimes, but those crazies threw a hood over his head and took him somewhere. Those guys look like bandits, but if they really were, they would have killed and looted a lot more. Now, I'd like to help, but I can't have my bar targeted by those freaks. You understand, don't ya? I ain't no soldier.”

Joe is a bartender in the town of Springfield in 2197.

The Warrior met Joe during the liberation of the town from the ghoul haters. Joe was very worried about safety of his bar. He also states that the attackers are not mere raiders, but a group determined to eradicate ghouls and overthrow the mayor.

Joe appears only in Fallout Tactics.

Joe and his tavern are references to Moe Szyslak and his tavern, from the TV series The Simpsons. In episode Lemon of Troy, the town of Shelbyville is depicted as a copy of Springfield, even having its own Moe's Tavern complete with Moe, only named Joe, owning Joe's Tavern.