BS02_JoannaMayfield
“I've spent two and a half decades fostering a self-sufficient, well-guarded and valuable service, all without some jackbooted overlords lookin' over us. The only thing the Brotherhood can offer is telling us what we can and can't do... and try to take a slice of my pie while they're at it. And thus, I have chosen to politely decline any collaboration between our organizations.”

Joanna "Jo" Mayfield[2] is the head of the Blue Ridge Caravan Company.

Formerly the head of a pre-War trucking company which shipped freight along the Blue Ridge Parkway, she reorganized her company after the bombs fell and began running brahmin caravans instead of trucks along the same route, thus forming the Blue Ridge Caravan Company. She inherited the company from her grandfather and has been managing it for two and a half decades.[3][1] Vinny Costa notes that although their headquarters is based far from Appalachia, Joanna was making plans to visit in the future.[2]

By 2104, Joanna arrives to oversee operations at the Big Bend Tunnel. She has been deliberately delaying speaking to members of the Brotherhood of Steel over the disappearance of several groups of people.[4] She had initially been trying to solve the issue internally, which she claims was in order to prevent the perpetrators from panicking and fleeing. However, Paladin Leila Rahmani suspects Joanna was afraid the news would scare potential future clients off and is only now cooperating with the Brotherhood because they had been caught lying about the kidnappings.[5]

Out of the Blue: The Vault Dweller and Paladin Leila Rahmani head to the Blue Ridge office to speak to Joanna Mayfield, as part of their investigation into the disappearances across Appalachia, which Blue Ridge may be connected with.

Joanna Mayfield appears only in Fallout 76. She was first mentioned in the Wastelanders update by characters such as Vinny Costa. She made a full appearance in the Steel Reign update, and previous dialogue was adjusted to fit her arrival. 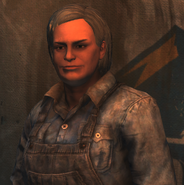 Joanna with her employee Aries