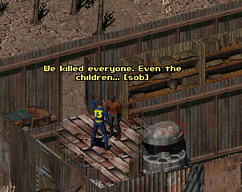 Be sure not to miss the deadline... Get it? Deadline? Hehehehe...

of the Slags. Find out about the dead bodies at the Ghost Farm and find out what happened to Karl.[1] is a quest in Fallout 2.

After the Chosen One has delivered the Slags' message to Jo, he'll ask the Chosen One to prove the Slags aren't dangerous. He sets a deadline of 31 days. When that time has passed, the townsfolk will head over to the Ghost Farm and take care of business.

Opting out will give 700 XP, offering to join Jo in the attack will teleport the Chosen One to the Farm of Ghosts for a battle. The latter will only net some negative Karma.

Aiding Modoc in a fight will teleport the Chosen One, Jo, Grisham, Davin, Cornelius, Balthas and Farrel to the Ghost Farm, where several Protectors with shotguns and several glowing slags attack. Although the townsfolk have marginally better weapons, most of them will die due to lack of proper armor. In addition, Cornelius and Farrel are unable to use their weapons (a 10mm SMG and brass knuckles, respectively), despite having the proper animation frames.

There also exists a more elaborate third alternative, as the quest title suggests. Heading over to the Ghost Farm, Vegeir, the leader of the Slags, will tell the Chosen One that the bodies are fake; with a Perception of 8 or higher the Chosen One could have spotted this without being told. He'll also inform the Chosen One that Karl was spotted by the Protectors running off to the west. (Vegeir may also say he ran off to the northwest, but this is a false clue. And a brutal one at that, considering the already rather harsh time limit.)

If Karl has already been encountered, and his story listened to, it will be known he is in the Den. Telling Jo this will save the trip. If Karl wasn't encountered, he will need to be located. Take Vegeir's advice and travel directly west from Modoc. Karl can be found drunk in Mom's Diner in the Den's East Side. Talk to him, learn his story, but be careful not to upset him. If successful, the Chosen One will have all the proof needed, then start the journey back to Jo before the 31 days have passed.

Retrieved from "https://fallout.fandom.com/wiki/Jo_is_suspicious_of_the_Slags._Find_out_about_the_dead_bodies_at_the_Ghost_Farm_and_find_out_what_happened_to_Karl?oldid=3415196"
Community content is available under CC-BY-SA unless otherwise noted.