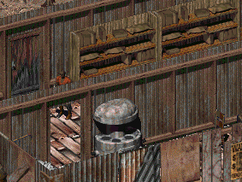 Something strange is happening at the farm northeast of Modoc. Investigate and report back to Jo
Jo is suspicious of the Slags. Find out about the dead bodies at the Ghost Farm and find out what happened to Karl

“The horror. Bodies strewn everywhere. Some crucified, while others were left to rot out in the sun. I still wake up screaming in the middle of the night from the horrible images I saw that day.”

An average person of average height and average complexion. Nothing out of the ordinary.[1] Jo is the epitome of average.

Jo appears only in Fallout 2 and is mentioned in the Fallout Bible.

Jo is a reference to the saying "an average Joe", used to describe a person as ordinary and completely normal.

Retrieved from "https://fallout.fandom.com/wiki/Jo_(Fallout_2)?oldid=3419624"
Community content is available under CC-BY-SA unless otherwise noted.