Jitters is one of two named radroaches caged in the sniper shack in 2277. It is locked in a cage, together with Fluffy.

Jitters appears only in Fallout 3.

Fluffy and Jitters have different names in some localized versions of the game, such as Cookie and Roby. 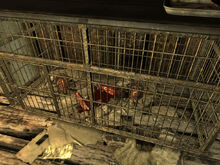