Jingwei's shocksword is a unique variant of the Chinese officer's sword in the Fallout 3 add-on Operation: Anchorage.

Jingwei's shocksword is the personal weapon of General Jingwei, the military commander of the Chinese forces in Anchorage. The sword's appearance is a cleaner version of the Chinese officer's sword, with a blue electrical current running up the side and a small switch on the handle, presumably for turning the electrical current on and off, although it has no function in-game.

The shocksword is made in the style of a Jian straight sword but with an integrated electric discharge device. Electrodes running across the blade release a powerful electric shock on contact with the target, both organic and synthetic. This unique weapon has been crafted with a lot of care and skill, exemplified by the insulated grip: It combines the symbols of ancient China (the lion) with the insignia of Communist China (hammer and sickle embedded near the hilt end of the blade).

In addition to its base damage of 35, it also deals 2 points of shock damage per second for 5 seconds, totaling 10 extra damage per hit. This effect is stacked with multiple successful strikes. The shocksword is one of the few weapons in the game that utilizes shock damage (not to be confused with the EMP damage dealt by pulse grenades).

Jingwei's shocksword can successfully strike about 486 times from full condition before breaking. Its durability is fairly low, being roughly half that of its variants. It can be repaired using standard Chinese officer's swords, or another unique variant, Vampire's Edge.

Holding or swinging the sword will not ignite gas leaks, but striking a character or creature while in the gas will. [verified] 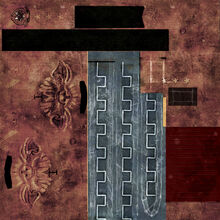