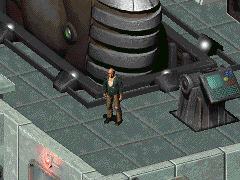 “I don't know the full story but at one point in the vault's history there was a rebellion. The overseer was either killed or overthrown, I'm not sure which. Anyway, the leaders of the revolution didn't want to entrust the fate of the people to another overseer so they installed this mainframe. The records say it was purchased from... oh, what was that name... Ah, I remember, the 'Brotherhood of Steel.”— Jimmy about the vault's history

Jimmy is a tall, lanky man who wears glasses. He is protective of the equipment in the vault, cautioning the player character not to touch it. Jimmy's specialization is software, not hardware, making him unable to fix the malfunctioning vault computer.

Jimmy can put the Mariposa Military Base on the map. Additionally, he briefly mentions the history of Vault 13, namely why Overseer Jacoren was replaced by a computer.

Jimmy appears only in Fallout 2.

Retrieved from "https://fallout.fandom.com/wiki/Jimmy_(Vault_13)?oldid=3343569"
Community content is available under CC-BY-SA unless otherwise noted.