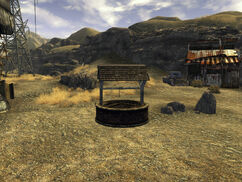 “What's that, Rex? Little Jimmy fell down the well?”— The Courier

Jimmy's well is a location in the Mojave Wasteland. The well is just south of Fields' shack, to the west of Nellis Air Force Base, just under the large overpass.

With the Wild Wasteland trait and Rex as a companion, sometime during the game, he will bark and by initiating conversation with him while he is doing this, a unique dialogue option to ask if a boy is in a well will be available. Rex will respond by barking and a marker will be placed on the map.

If the Courier visits the area before being alerted by Rex, the well will not be there, similar to Ranger Morales' corpse. Inside the well, along with a living mole rat, is a small, child-sized skeleton.

The well does not spawn on the map until the conversation with Rex about Jimmy's well is initiated. If the player character is standing right next to where it is supposed be before triggering the special dialogues, the well will spawn immediately after the map marker is added on the map.

Add a photo to this gallery
Retrieved from "https://fallout.fandom.com/wiki/Jimmy%27s_well?oldid=3445616"
Community content is available under CC-BY-SA unless otherwise noted.