Xuanlong assault rifle
Gun locker key, some minor loot
“I left the usual breadcrumbs all over some of the info terminals in this place; their computer security was a joke.”— One of Prime's terminal entries

Jiggs' Loot is an unmarked quest in Fallout 3.

There are a series of secret codes hidden within access terminals around the Museum of Technology. This is part of a series of security tests for a scavenger, Prime's allocation of loot for another comrade expected to show up at the museum. Be careful, you only get one attempt at entering the codes. If you make an error, you will not be able to complete this quest and will be unable to obtain the Xuanlong assault rifle.

Although Prime alludes that he has left '...the usual breadcrumbs' for the player to follow, the clue is actually in Prime's name, as the correct numbers are all prime values (divisible by only themselves and the number 1, for example, 2, 3, 5, 7, etc.). Successfully unlocking all three terminals will grant the player the password for the Security Office terminal, allowing them to unlock the safe.

Accessing any of these terminals allow you to begin this sequence.

Inside, the safe holds 200 caps, sundry other valuables, and the gun locker key for the planetarium office's cabinet. This cabinet contains several firearms, including a laser pistol or missile launcher and assorted ammunition (greatly varies, usually 3x assault rifles and a random weapon/ammunition). There is a Nuka-Cola Quantum on a shelf near the gun safe above the desk.

After entering the last terminal code, the player receives another note from Prime, Earned your share. In the note Prime tells his buddy to meet him at the "usual spot", the diner near Jury Street Metro station, which is marked on your map the moment you access the password. By the time you arrive, Prime is dead (lying on a table behind the counter), but is still worth finding. His corpse is in possession of 500 more caps, explosives, ammunition, and the unique weapon, the Xuanlong assault rifle. 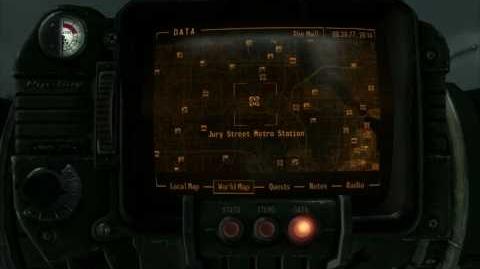