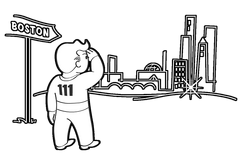 “The great, green jewel of the Commonwealth. Diamond City. The biggest settlement around.”— Mama Murphy

Jewel of the Commonwealth is a main story quest in Fallout 4.

This quest becomes available at the conclusion of When Freedom Calls quest, or upon first coming across Diamond City while exploring. Either way, the Sole Survivor will be told that Diamond City is the best hope for gaining further information about Shaun. Getting there from Sanctuary Hills is a long trek southeast. Upon crossing the bridge into the remains of the city, several wayfinding signs will aid the Sole Survivor in finding the settlement.

At the entrance, the Sole Survivor will witness a confrontation between Piper Wright, the owner of the local newspaper Publick Occurrences, and McDonough, the mayor of the city. Piper will use the Sole Survivor to trick the guard into opening the gate, thus letting them both in.

Speaking further with McDonough, a moderate-difficulty Speech check will get him to tell the Sole Survivor who to talk to about Shaun, and then they are allowed entrance into the Diamond City market. Asking any of the following individuals provides a clue to the Sole Survivor's next move:

Speaking with any of these people will direct the Sole Survivor to the Valentine Detective Agency. However, upon arrival at Valentine's place of business, his secretary, Ellie Perkins will inform them that Valentine disappeared while working on a case. Ellie hopes the Sole Survivor might lend a hand to help find him. Charming Miss Perkins will allow the player character to shake her down for a few caps upon delivery of her boss. In any case, agreeing to help will finish the quest and start Unlikely Valentine.

Retrieved from "https://fallout.fandom.com/wiki/Jewel_of_the_Commonwealth?oldid=3329125"
Community content is available under CC-BY-SA unless otherwise noted.