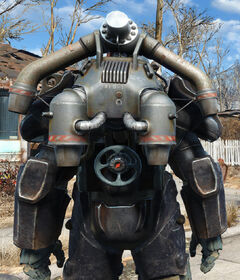 The jet pack is a torso power armor mod in Fallout 4.

When installed on power armor, the jet pack allows the wearer to propel into the air at the cost of AP. Similar to sprinting, this will drain fusion core power at an increased rate.

In order to craft the jet pack a power armor frame with the desired torso piece attached must be installed at a power armor station.

The jet pack is only available via crafting at a power armor station, with the exception of the T-60 variant which can be obtained as a reward for completing the quest A New Dawn. 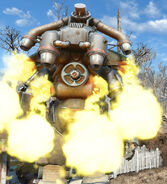 Jet pack in use

Loading screen
Add a photo to this gallery
Retrieved from "https://fallout.fandom.com/wiki/Jet_pack_(Fallout_4)?oldid=3446593"
Community content is available under CC-BY-SA unless otherwise noted.