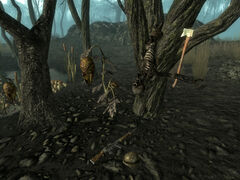 The remains of a parachutist found near the crash site.

The jet crash site is a location in Point Lookout in 2277. It is the site of a fighter jet's wreckage that is inhabited by feral ghouls. Despite this, the site has remained virtually untouched for two centuries.

On October 23, 2077, the day that the bombs fell, U.S. Navy jet aircraft 3-5-0 crashed in Point Lookout, ejecting its pilot, who got stuck in a tree some distance from the crash site, and was killed by the locals after losing his rifle. After the crash, a local soldier from the Turtledove Detention Camp removed the blackbox recording but was attacked and killed by the hostile inhabitants of Point Lookout; however, he managed to kill at least five of them as shown by the skeletons surrounding his body armed with spades and axes, as well as the ammunition and firearm lying next to his body.

A crashed jet somewhat buried in the mud, with skeletons and axes scattered all along the jet. The pilot's parachute can be found hanging on a tree a ways behind the jet, and a skeleton is sitting by the jet with a 10mm pistol and some 10mm ammunition. Beside the cockpit is a shovel, along with the blackbox recording holodisk. The crashed jet has some feral ghouls around the site, ranging up to feral ghoul reavers, if Broken Steel is installed.

The jet crash site appears only in the Fallout 3 add-on Point Lookout.