The nose section of a wrecked Skylanes jet airliner

Jet airliners are large pre-War commercial aircraft that flew passengers all over the Commonwealths of the United States. By 2287 several wrecks can be found throughout, with no known surviving examples.

The jet airliner was an all metal passenger plane in blended wing configuration. Passengers sat in the fuselage and in the wings. The wings had large viewing windows on the inboard leading edge, similar to an airship. Meanwhile, the fuselage maintained a standard 3-3 seating. It was powered by eight nuclear power turbo jets in clusters of 4 on each wing. In addition to engine inlets, the engine clusters also have a fifth intake possibly for air conditioning or turbo charging. The jetliner also had a vertical stabilizer on each wing. Passengers were stationed all down the fuselage. There were two lavatories at the very nose of the aircraft. Just aft of the lavatories was the cockpit access stairs. The cockpit was small with two pilot seats and a data recorder. The aircraft had at least two operators, Horizon Airlines and Skylanes Air. No aircraft remains intact and the jet airliner can be found at several locations in Fallout 4 & 76. Super mutants, ghouls, raiders or Gunners can often be found near crashed aircraft.

The jet airliner appears in Fallout 4 and Fallout 76.

The airliner most closely resembles a proposed but never built variant of Northrop Grumman's 1947 YB-49 flying wing. Both share the same long swept wings, with 8 in wing turbojets. As well as the same vertical stabilizer shape. The proposed civil variant has the same unusual oblong windows on the wing's leading edge and in wing seating. A nuclear powered variant was actually in the works at the time, but never flew.

Art design for the Jetliner 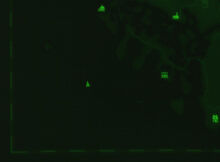 The location of a wreckage in the water, southwest of the Island
Add an image to this gallery
Retrieved from "https://fallout.fandom.com/wiki/Jet_airliner?oldid=3151505"
Community content is available under CC-BY-SA unless otherwise noted.