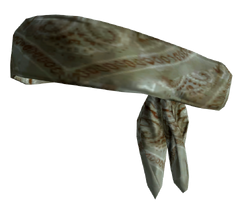 Jessup's bandana is a unique piece of headwear in Fallout: New Vegas.

It provides no Damage Threshold but has a bonus of 1 to Perception. It looks the same regardless of the gender of the wearer.

Jessup's bandana is worn by Jessup who is located in the Great Khan hideout in the Boulder City ruins (or later Red Rock Canyon). It can either be looted from his body or be reverse-pickpocketed.