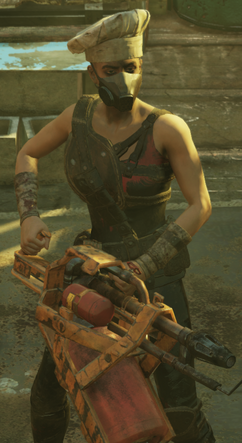 Jessi the Hook is a Blood Eagle in Appalachia in 2103.

Jessi and Frank the Butcher were the two main chefs for the Blood Eagles at Bloody Frank's. Though they mostly cooperated on their cooking, they were not above sabotaging each other to take credit. After he suffered stomach pains one night, Frank believed she poisoned him to take credit on a dish they made together. She had no clue what he was talking about, assuming it was just his weak stomach, but decided to use that tactic on him later.[1][2]

Jessi was also responsible for accepting Dishwasher Steve and starting him as a dishwasher, believing that he showed potential as a cook. However, she didn't expect that Frank would start stealing his ideas.[3]

Jessi the Hook appears only in Fallout 76, introduced in the Wastelanders update.

Retrieved from "https://fallout.fandom.com/wiki/Jessi_the_Hook?oldid=3301181"
Community content is available under CC-BY-SA unless otherwise noted.