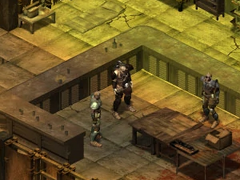 “You might have beaten old Jesse but YOU got bigger problems than me. *Cough cough* We'll see how your pretty little soldiers fare against those monsters.”

Jesse Gomer is one of the four main leaders who controlled the raiders in the region of Chicago in 2197.

Jesse Gomer, who lives in Rock Falls, is the most feared raider leader. He meets repeatedly with the other three raider leaders: Daisy-May Gomer (who is actually his relative), Bo Duffy, and Luke Daniels because he is scared of the situation they are in.

The group is caught in conflict between the Brotherhood of Steel and another menace, which is later revealed to be the Calculator. He is found and killed by the Warrior and his team, but before dying he tells the Warrior that the Brotherhood will not stand a chance against the threat that is coming. It is said than all Raiders bodies, including Jesse's, were later recovered by the Brotherhood and displayed around the region in crucifixion, to discourage anybody to follow their path.

His name is a reference to Jesse Duke, one of the Duke family members from the early 80-ties television series The Dukes of Hazzard.

Retrieved from "https://fallout.fandom.com/wiki/Jesse_Gomer?oldid=3485457"
Community content is available under CC-BY-SA unless otherwise noted.