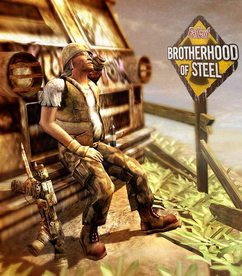 “Welcome to Carbon, big fella. Name's Jesse. I'm the trader in these parts... buy and sell just about anything... deal with just about anyone!”

Jesse is a trader in the wasteland, who is stationed in the town of Carbon. Jesse only has one arm due to an unknown accident.

He gives the Initiate a discount when he kills all the radscorpions in the Carbon Warehouse. He appears on the street first, but later moves into the warehouse to hide from raiders, like all the others. He had some trading agreements with the raiders, so he was able to move into their base, and he later helps the Initiate take down Jane, the raider matron.

Jesse the seller appears only in Fallout: Brotherhood of Steel. 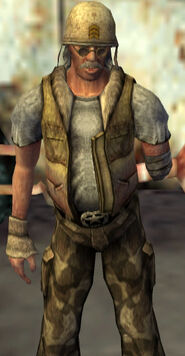 Jesse in-game
Add an image to this gallery
Retrieved from "https://fallout.fandom.com/wiki/Jesse_(Fallout:_Brotherhood_of_Steel)?oldid=2707392"
Community content is available under CC-BY-SA unless otherwise noted.