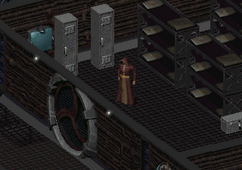 “Am I boring you? Some people say I talk a lot but I just don't think they understand. I just have a lot to say.”

Initiate Jerry is a member of the Brotherhood of Steel, stationed in the Lost Hills bunker in 2161.

He is located on Floor 2 in one of the bunk rooms, all alone. Jerry is a compulsive talker, though he seems blissfully unaware of this himself. He is indecisive as to whether he will train to be a Knight or become a Scribe. If the Vault Dweller joins the Brotherhood of Steel, Jerry will become his roommate.

Jerry appears only in Fallout.

Retrieved from "https://fallout.fandom.com/wiki/Jerry_(Lost_Hills)?oldid=3072111"
Community content is available under CC-BY-SA unless otherwise noted.