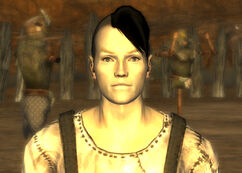 Great Khans
Followers of the Apocalypse (after Cry Me a River)

“I know, I know, it's not a very Great Khan-like thing to do.”— Jerry on his desire to write poetry

Jerry the Punk is a Great Khan poet living in Red Rock Canyon in 2281.

Jerry is a Great Khan that can't quite complete the ritual initiation to become a Khan. When Jerry was a child, the Followers of the Apocalypse came to Red Rock Canyon with pre-War books. Jerry used to spend hours reading these books, especially poetry books.

Jerry the Punk appears only in Fallout: New Vegas.

Jerry, in front of the Great Khan Arena
Add an image to this gallery
Retrieved from "https://fallout.fandom.com/wiki/Jerry_(Fallout:_New_Vegas)?oldid=3124334"
Community content is available under CC-BY-SA unless otherwise noted.