This is part 1 of the Jericho design document for Van Buren, the canceled Fallout 3 by Black Isle Studios.

The distant community of Jericho is located near the shore of the Great Salt Lake. It was once the Jericho Water Plant and part of the larger town of New Canaan, but that town was destroyed seven years ago by rioting refugees from the war in the west. Jericho is a rough frontier town, but Sheriff O'Connor keeps a firm grasp on the town. The water desalination plant is the source of Jericho's prosperity, and brahmin-pulled water caravans from Jericho are becoming an increasingly common sight in the wasteland.

Science Boys will have a great deal to do in this area, since the water plant is ancient and only producing water at a quarter of its capabilities. Repairing and upgrading the plant will do wonders for the town. There are also some fighting jobs for Combat Boys, and Stealth and Charisma Boys can learn the terrible secret hidden in Jericho's past. 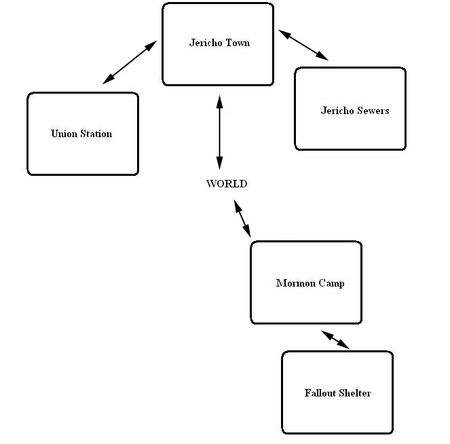 The Jericho Water Plant is all that remains of the Mormon city of New Canaan. The Mormons had struggled to be a moral center for the wasteland, outlawing drugs, alcohol, and slavery, as well as offering their own limited resources to refugees from the war in the west. The Mormons' charity proved to be their downfall. Due to constant incidents of "immoral" behavior, the Mormons kept all non-Mormons outside the town walls. The refugees grew in number, and the Mormons could not give away as much food and water as they once did. Hothead refugees spread the false belief that the Mormons were living like kings inside their walls while everyone else suffered, and a large number of refugees battered down New Canaan's gates and overran the small Mormon militia one evening, and in a single night of arson, rape, and murder, New Canaan ceased to exist. The Jericho plant itself survived only because a number of refugees who wanted nothing to do with the slaughter in New Canaan barricaded themselves inside it, keeping everyone else outside, even terrified Mormons who were screaming to them for help.

Nowadays, the water plant is the centerpiece of a small community, and not surprisingly, the community's chief export is fresh water. The scarcity of water in the wasteland has proven to be quite profitable to Jericho, and the town is thriving.

Many of Jericho's current citizens were around during the fall of New Canaan; some of them even took part in the slaughter and looting. An air of guilt hangs over the town like a miasma. In fact, the town feels a lot like Lago in High Plains Drifter (the citizens of that mining town didn't lift a finger to help their sheriff when they saw him being murdered, and now a sense of guilt pervades everything in town).

Justice for the Dead: Jeremiah Rigdon, a Mormon and self-proclaimed prophet, has formed a small band of Mormons calling themself the Hands of God. He's bent on vengeance and has begun raiding Jericho's caravans. Helping Jeremiah will result in the death of innocent Jericho citizens whose only fault was lacking the courage to help the Mormons when they needed it.

Other Role-Playing Tests and Epithets 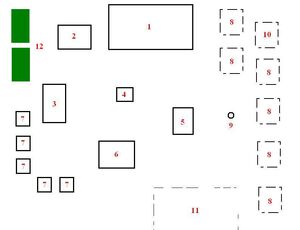 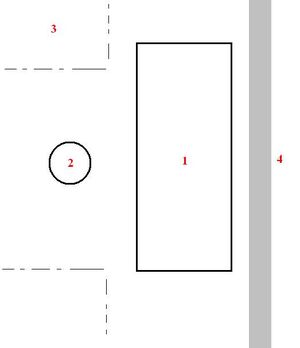 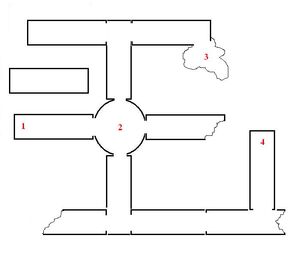 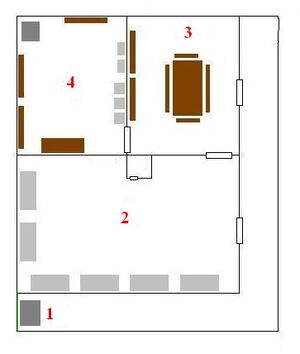 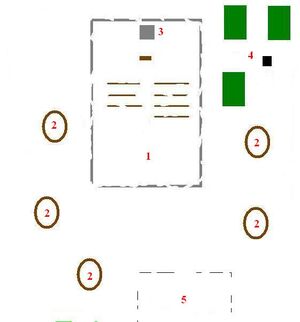 Tileset: Uses the junktown tileset, augmented by the city tileset.

Meta-tiles: Require meta-tiles for Anson's place (a bartender's bar) and many of the handpumps and pipes for the interior of the water plant.

Dynamic Objects: The gallows at the center of town is a dynamic object. It's currently empty, but it has room for three corpses which will sway in the wind. In addition, Anson's place, the water plant, the sheriff's office/jail, Doc Lane's store, the workers' dormitory, and the generic NPC residences should be dynamic objects since they can be burned down by Jeremiah and his followers. Some of the pipes, the storage vat, and the filling station at the water plant also need to be dynamic objects so that the player can repair them.

Tileset: Uses a combination of city and junktown tilesets for the exterior.

Meta-tiles: Need a meta-tile for the dried up fountain (it's got fancy carving and sculptures around it). Union Station itself needs a big meta-tile, since it's based on an actual building and isn't generic.

Dynamic objects: A big, ugly mud wasp nest which the player can attack and destroy is required. Two versions will be needed: an intact nest and a broken, shattered nest when the PC has destroyed it.

Meta-tiles: Need a meta-tile for the large pool of slimey water in the sewers.

Dynamic Objects: Most of the level is knee-deep in gooey, icky water (less if it's too much of a performance hit).

Dynamic Objects: The elevator and the doors of the fallout shelter are dynamic.

Dynamic Objects: The elevator which descends into the fallout shelter is dynamic.

Destruction of Jericho: If Jeremiah succeeds in destroying Jericho and the PC is present, perhaps the player can be treated to a movie of the water plant and other buildings completely engulfed in flames, eventually collapsing in among themselves.

Intermediate character. Male human. Sheriff and mayor of the town. He's a hard man, but not cruel. He won't let anything stand in the way of Jericho's prosperity.

O'Connor is a tall Hispanic man armed with .45 revolver and a .223 hunting rifle. He dresses a lot like an Old West sheriff – jeans, vest, Stetson hat.

Intermediate character. Male human. He runs the water plant and keeps an eye on the convicts doing all the labor.

Minor character. Male human. These guys are generic police officer-types armed with shotguns. Three of them will be wandering around town at all times, while two will be asleep in their bunks at the sheriff's office.

Intermediate character. Male human. Runs Jericho's general store and serves as the town "doctor". In reality, Lane has no medical skills, relying entirely on drugs to fix his clients. He's a new arrival, and rather cheerful in comparison to the rest of the town.

One of the prisoners from the Big Empty will asked to be returned to his wife and kids in New Canaan. Since New Canaan has been destroyed, Daniel will renege on his deal with PC and decide to hang out in Jericho for awhile (really didn't care about his family or his religion after all).

Intermediate character. Male human. Mormon Living Prophet and leader of the Hands of God. He claims that the Mormons cannot restore themselves to their former glory until Jericho cleansed of sin. It sounds dramatic, but he just wants the people of Jericho to give the Mormons' land back and move somewhere else.

Minor characters. Generic male and female humans, all part of Jeremiah's band. They're "elite" Mormons, combat veterans and tougher than the Mormons in the camp. Armed with knives, pistols, and hunting rifles.

Minor characters. This your generic plant worker (male/female humans and two or three male/female ghouls). Only has a hammer or a wrench for a weapon. These NPCs are all indentured servants or criminals convicted of minor crimes. Jericho doesn't like it when outsiders refer to the workers as slaves, even though that's what they pretty much are.

Intermediate character. Male human. Heads the brothel, and really, really despises women, but doesn't overtly show his hatred. He's usually very calm and emotionless, as is typical in this well-ordered town, runs a tight ship with his combo tavern/brothel.

Minor characters. Male and female humans. These generic people work for the water caravans and aren't permanent residents of the town. They tend to be loud and drunk when they're between caravans.

Three men and five women inhabit the Mormon camp to the southeast of Jericho. They're very meek and will ask the PC to leave them alone, but they'll turn violent if the PC tries to gain access to the elevator which leads to the shelter where Jeremiah is hiding unless the PC is persuasive. They're lightly armed with knives and a zip gun or two.

Ivan is the escaped plant worker. He is indeed guilty of the crime he was convicted of (theft), but he's not the healthiest of people. Ivan was afraid that he'd die working in the plant before his sentence was up, so he slipped out of the barracks at night and hid in the supply wagon of an caravan bound for Fort Abandon. He is still at Fort Abandon.

Female human. Marianne is one of Anson's prostitutes, and she's been drugs from him and selling them on the side to caravans that pass through town in an effort to buy her freedom and get out of Jericho.

Male human. After the plant has been upgraded with an automated pump and biodiesel generator, Krieger, a representative from Hoover Dam, will show up in town to negotiate a discount his town's water purchases, in exchange for an equal discount on one or more goods exported to Jericho.

Two male humans. who accompanied Krieger to Jericho. They direct the PC to Krieger if he tries to speak to them.

Male and female ghouls. Armed with pistols, hunting rifles, and various melee weapons. These ghouls have been holed up in the sewers beneath Jericho for a very long time. At the time of the War, a paramilitary citizen's group converted parts of the sewers into makeshift shelters in the event that the bombs fell while they were too far away to reach any proper shelter. Much of the group chose to remain and use the sewer system as a permanent home, fearful of the Commies they're certain are still running around all over the surface. They're not rational any more, and will attack the PC and his crew on sight.

Battery is one of the plant workers. Unlike the other workers, he actually volunteered at the plant for the opportunity to tinker with the unique machinery. He's a little bored now, but he doesn't have any real incentive to leave. The other workers, who are not there voluntarily, think Battery is weird and stupid for sticking around. Then again, he is a tribal.

About two feet long, these slimy monstrosities roam the flooded sections of the sewers beneath Jericho.

A horde of icky giant cockroaches infests one of the burnt out buildings in Jericho. They're not particularly threatening to the people, but they raid the cropfields and gross out the townsfolk.

Big, mean sewer rats wandering the drier parts of the sewers, mostly to avoid being attacked by the leeches. They've recent begun making bold raids on the Jericho food supply, injuring several townspeople in the process.

These giant, dangerous annoyances have built themselves a nest in the abandoned Union train station to the south of town. They will have to be dealt with if the PC plans on connecting a train to Jericho.

A group of five men out patrolling near the city. They are lightly armed with pistols and pipe rifles. They're not looking for trouble, but they will defend themselves against the PC if the PC doesn't look too tough. The PC will run into this group a maximum of three times (unless he kills them all in a early encounter).

The PC comes across the remains of a destroyed water caravan, but no bodies. If the PC scrounges, he can find some supplies which survived the blaze.

Retrieved from "https://fallout.fandom.com/wiki/Jericho_design_document/1?oldid=3446999"
Community content is available under CC-BY-SA unless otherwise noted.