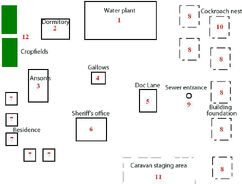 Jericho is a town located near the shore of the Great Salt Lake. It was once the Jericho water plant and part of New Canaan, but it was destroyed seven years ago by rioting refugees from the war in the west. Jericho is a rough frontier town, but Sheriff O'Connor keeps a firm grasp on the town. The water desalination plant is the source of Jericho's prosperity, and brahmin-pulled water caravans from Jericho are becoming an increasingly common sight in the wasteland.

The Jericho water plant is all that remains of the Mormon state of New Canaan. The Mormons had struggled to be a moral center for the wasteland, outlawing drugs, alcohol, and slavery, as well as offering their own limited resources to refugees from the war in the west.

The Mormons' charity proved to be their downfall. Due to constant incidents of "immoral" behavior, the Mormons kept all non-Mormons outside the town walls. The refugees grew in number, and the Mormons could not give away as much food and water as they once did.

Hothead refugees spread the false belief that the Mormons were living like kings inside their walls while everyone else suffered, and a large number of refugees battered down New Canaan's gates and overran the small Mormon militia one evening, and in a single night of arson, rape, and murder, New Canaan ceased to exist. The Jericho plant itself survived only because a number of refugees who wanted nothing to do with the slaughter in New Canaan barricaded themselves inside it, keeping everyone else outside, even terrified Mormons who were screaming to them for help.

Nowadays, the water plant is the centerpiece of a small community, and not surprisingly, the community's chief export is fresh water. The scarcity of water in the wasteland has proven to be quite profitable to Jericho, and the town is thriving.

Jericho was a location planned to appear in Black Isle's canceled Van Buren, replacing New Canaan which was cut due to time constraints.

Retrieved from "https://fallout.fandom.com/wiki/Jericho_(town)?oldid=3417150"
Community content is available under CC-BY-SA unless otherwise noted.