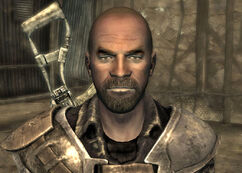 “I didn't sign on with you so that we could be playing Santa Claus out here.”

Jericho is a former raider and possible companion living in Megaton in 2277.

Jericho was born in 2212. He was once a dangerous raider out in the Capital Wasteland, who killed and stole for measly amounts of caps and loot. After fighting with the raiders for many years and becoming a crack shot with a rifle, Jericho settled down in Megaton to enjoy his twilight years, but he didn't lose his raider ways. The smarmy, rude Jericho helps protect the town, but still gets drunk and curses at passersby. He's thought about getting back out into the wastes to fight again, but not without some caps for "equipment." Jericho occasionally does some odd jobs for Colin Moriarty.[1]

Reading Moriarty's terminal suggests that Jericho may have once attempted to rape Jenny Stahl. Although this cannot be brought up in conversation, Jericho and Jenny may exchange dialogue that can relate back to this.

Like all other Megaton characters, Jericho might go missing or turn up dead. See recovering missing non-player character in Fallout 3 on how to resolve this issue.[verified]

Retrieved from "https://fallout.fandom.com/wiki/Jericho_(character)?oldid=3456572"
Community content is available under CC-BY-SA unless otherwise noted.