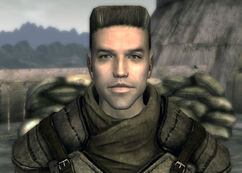 You'll Know It When It Happens
Arizona Killer

“Momma always told me not to talk to strangers, but you seem like a nice person.”

Private First Class Jeremy Watson is an NCR soldier being honored during Aaron Kimball's speech in 2281.

Born in a tin shack on the outskirts of One Pine, Jeremy Watson never had it easy. His father worked as a caravan guard on the Short Loop, and his mother, like many Californians, braved the ruins of the Old World as a prospector. They suffered through water shortages, raider attacks, and the NCR's war with the Brotherhood of Steel. One day he was left on a farm when his mother was prospecting, and she never came back. The owner didn't want him around and kicked him off his farm. After that, a man asked him if he wanted to join the NCR Army. He did and several years later was stationed at Camp Forlorn Hope where his platoon was attacked, and he took a risk to save them. He was then awarded the Star of Sierra Madre for this act of bravery, and the Star was to be given to him by President Kimball at Hoover Dam.[1]

Retrieved from "https://fallout.fandom.com/wiki/Jeremy_Watson?oldid=3188305"
Community content is available under CC-BY-SA unless otherwise noted.