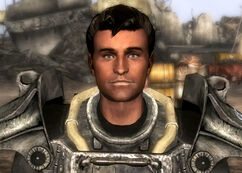 Paladin Jensen is a paladin of the Brotherhood of Steel in 2277.

A scout for the Brotherhood of Steel, Jensen is apt to make tactical blunders that put both himself and his teammates in jeopardy. He firmly denies that he's a liability. In fact, he models all his actions on his favorite superhero, Captain Cosmos.[1]

After Broken Steel is loaded, Jensen is held prisoner inside a tent in the Talon Company camp at Fort Bannister. He was sent to scout out Fort Bannister in preparation for a Brotherhood of Steel assault against Talon Company in response to their attacks on Aqua Pura caravans but was found and captured.

Paladin Jensen appears only in the Fallout 3 add-on Broken Steel.

Jensen and his squadmates may continue firing at a dead body, and they won't stop even if one disposes/hides the body. [verified]