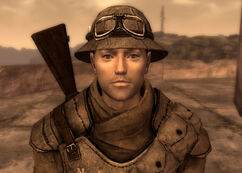 Arizona Killer
You'll Know It When It Happens

“The President is visiting today. Ranger Grant doesn't want anyone snooping around up there that doesn't have authorization. Only NCR engineers or people with explicit permission from Ranger Grant are allowed roof access.”

Private Jensen is a soldier guarding the entrance to the landing pad at Hoover Dam in 2281.

Jensen stands guard at the Vertibird helipad at Hoover Dam. If the Courier passes him without authorization, he and all NCR soldiers near him will turn hostile towards them.

Jensen only appears for the quests You'll Know It When It Happens and Arizona Killer. He is removed from game after the quests are completed.

Retrieved from "https://fallout.fandom.com/wiki/Jensen_(Fallout:_New_Vegas)?oldid=3124392"
Community content is available under CC-BY-SA unless otherwise noted.