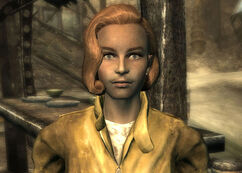 “Now I KNOW I've never seen you in Megaton before. Let me guess -- just passing through, right?”

Jenny Stahl is a citizen of Megaton, and one of the proprietors of the Brass Lantern in 2277.

Jenny, a 24-year-old member of the Stahl family, is often a mediator between her brothers, Leo and Andy. Growing up somewhere out east,[1] her parents died when she was a child, thus she and her two brothers Leo and Andy raised themselves. Jenny is attracted to Billy Creel, who reciprocates these feelings, which is why Billy comes to the restaurant to eat.[2]

According to Colin Moriarty's files, Jenny Stahl was almost raped by Jericho.[3] Jericho may randomly approach Jenny at the restaurant, attempting to flirt with her, though Jenny will vehemently reject his advances, calling him disgusting and stating that he knows "goddamn well" why she is hostile towards him.[4]

She stands outside the Brass Lantern during most of the day, serving local Megaton settlers. At night, she relaxes; advising prospective customers to see her co-worker and brother, Leo.

* Only if Leo Stahl is also dead.

Jenny Stahl appears only in Fallout 3.

Retrieved from "https://fallout.fandom.com/wiki/Jenny_Stahl?oldid=3343655"
Community content is available under CC-BY-SA unless otherwise noted.