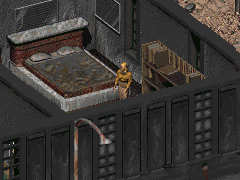 “You really have a lot of staying power. That's the nice thing about younger men. Sure wish there were more like you in town.”

Jenny is a bath attendant working in the bathhouse in Klamath Downtown.

Jenny is an attractive, but tired, young woman.[1] A prostitute of the finest sort and educated at the finest schools, Jenny is the priciest and nicest looking woman in the Klamath bathhouse and, incidentally, the favorite girl of Vic.

Find Vic the Trader: The Chosen One can ask Jenny about Vic.

Jenny appears only in Fallout 2.

Retrieved from "https://fallout.fandom.com/wiki/Jenny_(Fallout_2)?oldid=3073114"
Community content is available under CC-BY-SA unless otherwise noted.