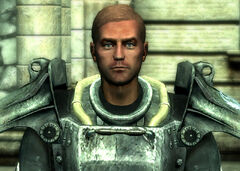 Initiate Jennings is a fallen initiate within the elite Lyons' Pride of the Brotherhood of Steel in 2277.

Paladin Vargas, whose job is to train initiates and steer them away from heavy fighting, has failed in this responsibility. His oversight has recently resulted in an attack on a group[1] of Brotherhood of Steel initiates. Initiate Jennings bore the full brunt of a super mutant attack and recently succumbed to the wounds.[2]

During the main quest Following in His Footsteps, certain quest paths allow the Lone Wanderer to emerge from the Chevy Chase North metro station, only to be surprised by two super mutants, who are soon engaged by Sarah Lyons, Paladin Vargas, and his charge Initiate Reddin. After the two super mutants are killed, the player character moves with the Lyons' Pride members down an alley. At a corner, they see Knight Captain Colvin firing on some super mutants. Initiate Jennings is already dead, on a mattress on the ground next to Colvin, still armed with a laser pistol and wearing his power armor, but with his power helmet off and beside him. Several energy cells can be found next to his head.

Initiate Jennings appears only in Fallout 3.

Retrieved from "https://fallout.fandom.com/wiki/Jennings?oldid=3450185"
Community content is available under CC-BY-SA unless otherwise noted.