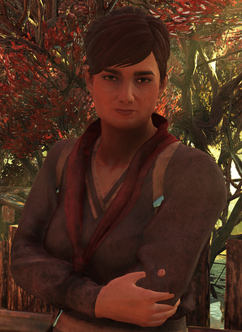 Jennie Brown is the leader of the Villagers at The Retreat in 2103.

Prior to the Great War, Jennie lived with her family spending her days watching television and gossiping.[1] Her family perished in the War, and she dealt with this by offering companionship and kindness to survivors she met in the wasteland, with many deciding to follow her.[2] She became the leader of her new "little family", following a nomadic lifestyle and regularly recruiting people while traveling, going at least as far as Georgia.[3] The group eventually became too large to continue wandering, and so decided to settle down,[4] electing to settle in Appalachia after hearing talks about other groups returning to the region.[5] They declined to join with the Settlers at Foundation because they wanted to keep their independence and to avoid "the drama" between Foundation and the Crater.[6] The group eventually chose to live in the treehouses in the Mire due to the tactical advantages living high above the ground presented.[7]

Describing herself now as the "mama hen" of her "little family", Jennie and her villagers have recently been threatened by a Blood Eagles leader named Dagger.[8] Initially, Dagger sent some spies who pretended they wanted to join the group right after settling in the treehouses. After Jennie and her group finished establishing a base, the spies left and reported back to Dagger. The following day, Dagger and her Blood Eagles showed up and demanded some of the group's stockpile,[9] including food, water, and medical supplies.[10] Enough food is being taken that some people in the group are starting to go hungry.[11]

Disarming Discovery: The Vault Dweller aids Jennie Brown and her villagers by dealing with Dagger and the Blood Eagles at Dagger's Den.

Jennie Brown appears only in Fallout 76, introduced in the Steel Dawn update.

Retrieved from "https://fallout.fandom.com/wiki/Jennie_Brown?oldid=3464562"
Community content is available under CC-BY-SA unless otherwise noted.