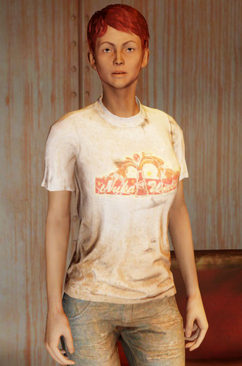 Jen is a member of the Settlers residing in Foundation in 2103.

Jen is the youngest scavenger in Foundation, having learned from scavenging with her parents. Her parents had a complicated relationship, both Chinese spies who fell in love despite it being forbidden. Because Jen's birth was completely unsanctioned, she was never indoctrinated into Chinese thought like her parents were from birth (but still learned Chinese from her parents), but Jen still knew of her parent's occupation as spies. Despite her heritage, she has lived in America for her entire life, mostly in the Capital Wasteland.[1][2] Her mother disappeared suddenly in 2092, leaving her and her father alone. Assuming she was dead, the two moved on. Her father fell to the horrors of the wasteland soon after, and Jen buried him in his stealth suit.

Since then, she has fallen in with the Settlers at Foundation. She is pulling her weight as a talented electrical engineer,[3] familiar with all sorts of high end, especially Chinese technology, but does not give that away for fear of how Great War survivors might react. However, she is not adept at hacking and usually collaborates with other people when working on robots.[4]

After the completion of Invisible Ties, Jen will award the player character with plans for the Chinese stealth armor and helmet. She will also give them a note, Note from Jen, which states that she managed to find plans for standard Chinese stealth armor, though it is not as advanced as the prototype she wore. At this point in the story, however, she had not yet used or worn the stealth suit, having only just acquired it earlier in the quest.

Jen has multiple endings and outcomes as a result of the player's actions during the main quest of Wastelanders. A choice will be presented during Invisible Ties to either kill Mochou, or with a high enough Charisma or Intelligence, convince her to spare Mochou.

Jen appears only in Fallout 76, introduced in the Wastelanders update.

Retrieved from "https://fallout.fandom.com/wiki/Jen?oldid=3468507"
Community content is available under CC-BY-SA unless otherwise noted.