Scientific Pursuits
The Waters of Life
Take it Back!
Holy Water

Fallout 3
“Tin foil hat time children, my eyes and ears tell me the big, bad government has taken over that big machine thingy at the Jefferson Memorial. You heard it here first my friends, the Enclave is on the scene.”— Three Dog, Galaxy News Radio

The Jefferson Memorial is a monument in the Capital Wasteland in 2277.

The memorial was selected by project lead James for Project Purity. The project's stated aim was for converting the memorial into a water purifier where the river's water could be cleansed of radiation for use by residents of the Capital Wasteland. Project Purity was abandoned after James' wife Catherine died giving birth to their child, and then picked up again 20 years later. The statue of Thomas Jefferson can be seen submerged within the Project Purity facility as it is activated.

In the add-on Broken Steel, the purifier is operational. Brotherhood of Steel knights and scribes work inside and patrol the outside of the memorial under the direction of Bigsley, overseeing the ongoing operation of Project Purity and organizing the distribution of the Aqua Pura it generates. Additional knights patrol the catwalks and shore for dying mirelurks. The water caravans that depart from the Jefferson Memorial head west from the memorial to Smith Casey's Garage, northeast to Paradise Falls, and then continue to the Republic of Dave where they turn around back on their route.

It has five interior sections that can be accessed. The exterior of the Jefferson Memorial has a variety of platforms as well as a few super mutant patrols. The entrance to the memorial is through the gift shop doors on either side of the platform.

Upon entering the memorial from the gift shop side entrance, one enters into a long hallway. At the other end of this hallway is a rubble-filled room with a sewer grate hatch that is accessible and is the main part during The Waters of Life quest. Taking a right down the hall leads to a lobby with the gift shop and a turret placed on the roof, Bigsley's office during Broken Steel to the left and ruined bathrooms to the right. Once past the second double doors, you enter an area of ruined corridors and entrances to the rotunda and the memorial sub-basement. Before The Waters of Life quest, these areas are filled with level-dependent super mutants, including super mutant overlords at higher levels. This area includes many random junk items, and one Nuka-Cola vending machine.

The rotunda is home to the Project Purity purifier; the purifier itself is built around the statue of Jefferson. The rotunda floor is covered in water and one cannot swim through it. The purifier has two levels of catwalks that hang over the pool of water that was the rotunda floor. The first-level catwalk encircles the purifier with a dead-end at one end and a staircase leading to the second level on the other. The second level is an enclosed catwalk of steel and glass window walls. The activation panel is located here along with the Auxiliary Filtration Input system panel into which the modified FEV can be injected. Two leveled super mutants will spawn here: one on the first level catwalk and the other on the second level.

Going down the stairs one enters into a room filled with ruined desks and shelves, plus a gore bag left by the super mutants. In the middle of this room is a fenced opening that looks down onto the flood pools below. To the left of this opening is the mainframe, which can only be accessed during and after the quest, the Waters of Life. To the right is a hall leading to a room on the left and the stairwell to the below level. The room on the left of this hall is a small clinic with an examination table and medical and surgical tools on a tray. This is the room in which the Lone Wanderer was born.

Down the stairs, one enters into what used to be the living quarters for the Project Purity science team filled with bunkbeds, footlockers, and filing cabinets. Past this room, one reaches a four-way intersection of hallways. Taking a right leads to the flood pools. Taking a left leads to the flood control switch and James' former sleeping quarters. Going straight forward leads to a turn and a room on the right at the end of the hallway. This room leads to another room where the auxiliary power fuse box is located. This room and the flood pools area are connected here by a small hallway. This area is filled with level-dependent super mutants. If the Broken Steel add-on is installed, when one returns to the Jefferson Memorial after completing Take it Back!, the door to the memorial sub-basement will be boarded up.

Jefferson Memorial appears only in Fallout 3.

The statue inside the Rotunda

The activated purifier in Broken Steel

Ending slide of the memorial 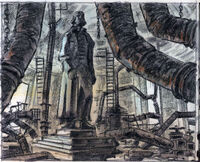 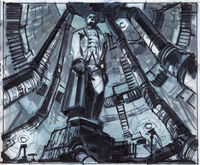 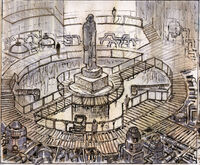