Decide the fate of the laboratory

Jefferson is the ninth or tenth mission in Fallout Tactics.

Right next to your squad at the insertion point will be the Scouter. You can use it for drive-by tactics, but it can only hold two people at a time and, depending on your squad, it may be better to just proceed on foot. The map consists of a long road in a zig-zag pattern. Following this path will have the most resistance by super mutant forces, but the off-road shortcuts tend to be minefields. If you do decide to take the shortcuts, you should have a squad member with an adequate amount of Traps skill. 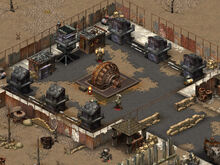 Further down the road is the second generator, which will have automated gun turrets guarding it along with a few super mutants. There is a small door on the left side of the fence which makes it possible to either sneak or run past the one turret on that side and avoid fighting it altogether. There is also a small entrance on the right side, it is not a door, it is a gap beatween the wall. 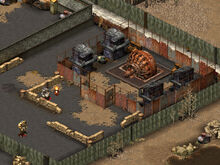 The third generator is in a make-shift fortress of fencing and sandbags with quite a few more super mutants than the previous generators. Shooting through the gaps in the fencing will take care of most of the melee Mutants, and the rest can be dealt with either from a distance or using cover. Once the third generator is destroyed it will open the two large black doors to the factory. Inside will be a Commander who will not initially be hostile, but after a speech, will attack wielding a cattle prod. 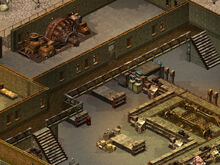 The fourth generator is inside the factory, completely unguarded. The factory, as it turns out, is not a weapon's manufacturing plant at all, but a research facility led by Erkal, who is trying to cure the super mutants' sterility problem. You are now given the choice of either destroying the research or leaving it for the BOS to capture to use as a bargaining chip. Once you decide, destroy the generator in the room upstairs and then move to the exit grid.

Retrieved from "https://fallout.fandom.com/wiki/Jefferson_(mission)?oldid=3173824"
Community content is available under CC-BY-SA unless otherwise noted.