NPCM_JeffNakamura
“I lost every friend I had on that day, and for a long time, I felt like it was unfair that I survived. Like I should have died with them. But that all changed on the day I met you, Amy. You gave me a reason to want to be alive. That's why I wanted to ask you...”— The big day

Jeff T. Nakamura was a senior member and quartermaster of the Responders in Flatwoods before 2102.

Jeff was assigned to reconnaissance and foraging in Morgantown near their headquarters.[1] Maria Chavez wrote to him with the idea of sending a team to scavenge Gauley Mine.[2]

In 2082, Jeff volunteered to go on a mission to Pleasant Valley Ski Resort.[3] Less than an hour away from the city of Charleston, Jeff heard a loud blast from the dam and witnessed the Christmas Flood, where the river washed a large portion of the city away. This experience caused him to suffer survivor's guilt.[3]

After the flood, Jeff met Amy Kerry, an acquaintance of the Responders and a Vault-Tec University graduate, who he took on a first date to Cow Spots Creamery.[4] He subsequently proposed to her near Summersville, but Amy declined, insisting that they should both focus on rebuilding Appalachia instead.[3] Jeff said he felt that starting a family could be part of the rebuilding and that it could help give them something to live for, and Amy agreed to let him know if she ever changed her mind.[3] Jeff's proposal ring can still be found at this location.

In 2095, Amy began staying around the Tygart water treatment site where she stayed in a trailer and had her own terminal where she wrote entries documenting her life.[5] Jeff would sometimes visit her and send messages to her terminal. Despite constant pressure from the group to join the Responders, Amy opted to remain separate from them but continued working on a project to create a program to monitor the environment for contamination by the Scorched with their assistance. The frequent requests for her to join caused her friction with Jeff and Maria.

One day, Amy got bit by a mole rat and became quite ill. She thought she was done for, but Jeff came to visit her by chance. It made Amy realize how compassionate and noble Jeff was and how important he was in her life.

Jeff told Amy that someone at Responder HQ slipped up and mentioned her environmental monitoring program during one of a Brotherhood of Steel visit. Jeff was concerned and thought the Brotherhood soldiers would do anything necessary to win their fight, and he implored Amy to flee for her safety. Jeff's fate is unknown.

Jeff's voice is heard on the holotape The big day, during the events Collision Course and Death Blossoms, and on the Responders camp signal.

Jeff Nakamura is mentioned only in Fallout 76. 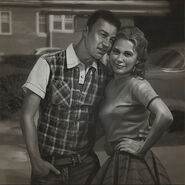 Jeff with fellow Responders Maria Chavez, Melody Larkin, and Sanjay Kumar in a photograph found at the AVR Medical Center